Increase The Production Output of Your Granulation Process Equipment

The four most common granulation processes for pharmaceutical solids are wet granulation, dry granulation, extrusion and ‘slugging’ (extrusion and slugging are not addressed in this blog). Using a full batch IBC to transfer a dispensed lot into a wet granulator mixer significantly reduces the cycle time of the granulation process, thus increasing the output of such high investment equipment accordingly. Typical handling difficulties with pre-granulated powders can be solved using Cone Valve technology, notably raising the speed of transfer too. The intrinsic ‘housekeeping’ improvement of the technology also reduces contamination risks and cleaning downtime.

Being a continuous process, dry granulation calls for an operator to be present for refilling of the roller compactor feed hopper. By utilising an IBC and automatic refill of the hopper, this necessity is removed however introduced are the dangers of unwanted segregation and blocking effects.

This is easily solved with a controlled and automated direct refill system, proven to feed the roller compactor without interruption, whilst maintaining the homogeneity of the (blended) upstream batch. Specific attention must be given to proper venting.

Materials handling activities play an important role in supporting a Quality by Design regime. When process parameters are defined, measured and controlled, it is of utmost importance that the Materials Handling System does not change the integrity of the batch in any way. Segregation, blocking or even breakage (tablets) cannot be allowed in such an environment. Cone Valve Technology enables you to achieve this. Granulation is not considered a value adding process and in lean terms, is a waste. The equipment is expensive and the energy consumption high. It makes every sense therefore to eliminate the granulation step entirely. This is called direct compression and should be the preferred option from a lean point of view. However, it is often not an easy operation due to insufficient compressibility of the blend. Other reasons for avoiding this method are related to typical powder handling issues; segregation and interrupted transfer. These should not make you give up on what is very low cost manufacturing of solid dosages. Modern Cone Valve technology solves these handling issues as you will see in more detail later in the report.

Being the most common granulation method, the batch-wise ‘wet’ process is certainly worthy of a closer look. Targeting to increase the output by more than 20% is a realistic goal. Traditionally, commercial production size mixer granulators are (semi-) hand fed using drums, kegs or IPCs (Inter Process Containers – not to be confused with IBCs which are normally bigger). If we consider typical lot sizes of 100-600 kg, then often dozens of 20kg drums or multiple IPCs are required to charge the machine. Besides ‘tradition’, the reason for using such small, inefficient transport media is due to the limits of manual handling or could be the result of poor experiences with larger IBCs - inability to discharge the powder without severe operator intervention – basically ‘hammering’, which we will discuss later.

Another way to charge the granulator is by utilizing a vacuum transport system. This works better for single product granulation (because of the difficulty with cleaning the system), however it is relatively slow. We’ll come back to that later.

Rapid Mixer Granulators are high-built machines with a large drive plinth underneath, so drums often have to be lifted more than 2-3 metres for positioning above the mixer inlet - drum after drum... which results in a long transfer time of around 30-60 minutes just to feed the process.This ‘waiting’ in the granulation process has a very negative effect on the Overall Equipment Effectiveness (OEE) of this expensive machine. Let’s assume a 60-minute mixing cycle time, consisting of pre-mixing the powders, adding the liquid binder, final mixing and transferring of the complete lot to the dryer. When the 30-60-minute waiting time during powder charge is added to the cycle, it is easy to see how the OEE component reduces to 50-70%. This would be the case during a campaign of the same formulae and if cleaning is introduced after x number of runs, the additional average cleaning time per run is also brought into the equation. Similar calculations can be made when charging the system using vacuum conveying. Although often faster than drum handling, the granulation system is still forced to wait a considerable amount of time. Another disadvantage to a conveying system is the lack of assurance that all powder has been transferred. This is very difficult to inspect and validate. But what if we can bring the charging time of the granulation lot down to 5 minutes?

This is achievable when using a full lot size IBC. OEE of the Granulator increases to 90%! A bigger lot-size provides a higher potential for improvement effect. For example, a 20 kg granulator can be fed using one drum, which is then already a full lot transfer. A 600 kg granulator however, requires 30 drums to feed. For a full lot transfer in this instance, these drums can be replaced by one off 1200 litre IBC. 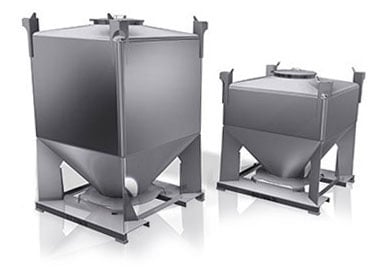 Less quantifiable, but still significant, is the potential improvement of hygiene inside the granulation room. It is easy to see that multiple transfers (drums/IPCs) result in multiple exposures of product and environment as well as a higher dust load. This not only heightens the risk of contamination or occupational hazards but also increases the frequency and intensity of cleaning.

There is a problem however. Prior to granulation, the dispensed lots are not particularly free-flowing and severe difficulties can be expected when trying to discharge a larger IBC into the wet mixer. It is obvious as well that the IBC cannot leave powder behind and must be completely empty each time. This must be monitored using pre and post-weighing or validated and regularly checked. Traditional IBCs, using butterfly valves in the bottom, are known to give discharge problems when the powders are not fully free-flowing. One improvement can be found using ‘flow bins’ where the angle of the conical section of the bin is steep enough to prevent ‘bridging’ effects. This works for a particular powder characteristic but is not an overall solution for all typical pharmaceutical solids. Such a design is therefore less suitable for multi-product production lines. In addition, a steep conical section significantly adds to the height of the bin, which limits the maximum lot size for a given ceiling height or adds to the cost of the building if a high ceiling design is adopted.

Vibrating the bin, by mounting vibrators on the positioning frame or on the IBC itself, can sometimes aid but can also have a counter effect - the powder compacts even more and blocks completely. If the powder is stuck, the lid must be removed and consequently the transfer is now a fully open one….

This creates GMP risks as well as additional room cleaning costs. A better solution can be found using Cone Valve technology! The Discharge Station, which lifts the cone valve inside the docked IBC, ensures the breaking of bridging and promotes the speed of discharge further by using an In-Powder vibrating system. This feature provides enough guarantees that the lot is fully transferred from the IBC to the granulator without interruption.

The Matcon Cone Valve System comprises of an IBC with 'passive' cone valve and an 'active' discharge station used to control the valve, creating a high level of containment by design. This lowers the required cleaning frequency of the granulation suites, as well as the time it takes, providing a direct operational cost saving. This way, other than the height of the building itself, there is no limitation for Full Lot Transfer with all the benefits already described. Cone Valve technology also represents an viable solution to the material flow problems that could occur with direct compression manufacturing methods as indicated in the second paragraph.

From a cost aspect, roller compacting is a very attractive alternative to wet granulation. The equipment is smaller, less expensive and the energy saving is significant. Although not a particularly new process, recently the attention paid to dry granulation has been growing and this is largely driven by the industry’s need to reduce manufacturing cost.

Unfortunately, not all products can be dry granulated. The best chance for success is found when the roller compactor is already part of the design or development phase of the product and integrated in the application documents of the drug.

There are several different roller compactor versions on the market, each with their own specialties and benefits, but playing a major role on all versions is the control of the flake thickness. This task is made easier if the level of powder in the feed hopper is constant and the density of the material does not fluctuate. Much emphasis is therefore put on the de-aeration of the powder and the avoidance of segregation.

This can be achieved simply by charging the feed hopper manually, copying the circumstances of the R&D environment.

Although an operator can easily keep up with the output of even a large production unit (<500 kg/h), this adds to the cost of granulation. On top of that, refilling the hopper by scooping powder from a drum is a very open way of transfer, consequently increasing the contamination risks, operator safety and cleaning costs.

A full batch IBC feeding system would replace the need for an operator scooping and provides the following benefits:

Would a classic IBC with butterfly valve fulfill the criteria above? No.

Once a classic version IBC is opened and powder starts to flow around the valve, it is not easy, if not impossible, to stop the powder flow by re-closing the valve. It would require ‘force’ which cannot be part of a Standard Operator Procedure.

Unless the bin is designed as a ‘flow bin’ (which is very tall as said), there is a good chance that the flow out of the bin would ‘rat-hole’. Powder on the sides would remain and particles start to roll over one another, creating the undesired segregation effect. In a worst-case scenario, powder could stop flowing altogether. To avoid this, frame vibration is often introduced, but that adds to segregation risks and, as sometimes experienced, has a counter effect. Unfortunately, operators also take to hammering the bin, leading to damage to containers and further blend segregation.

But finally, the classic bin does not create a good containment situation. After closing the butterfly valve, the lower side, which has been in contact with the powder, is exposed to the environment, with spillages or air born dust the consequence.

Again, the Cone Valve IBC presents the best way forward. The Cone Valve holds back the flow through the centre and promotes flow along the IBC sides. This makes rat holing far less likely and ‘mass flow’ within reach. The closing of the cone is directed downward, in line with the powder flow. This means the flow can be easily interrupted based on level probe signals from the roller compactor’s feed hopper, providing the control of flow and mimicking of manual feed. Care must be taken however to design a proper venting system.

The last two design criteria, containment and the bridge-breaking capability of the Cone Valve system, have already been discussed.


A robust material transfer and handling system from Matcon will safeguard your plant’s Quality by Design efforts. If you are open to potential new ways of pharmaceuticals processing, then why not contact the Matcon team, to ensure you address any efficiency issues you are experiencing.

Blog articles direct to your inbox

For the latest news, insight and updates.