How the Wrong Hopper Valve Might Be Costing Your Plant Money 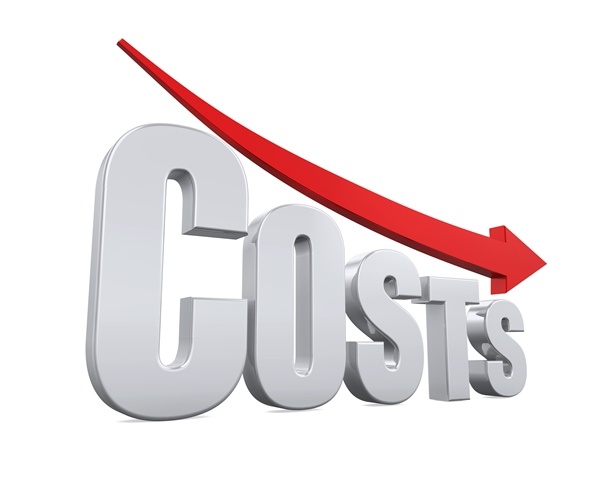 Industry experts agree that Mass Flow is the preferred discharge pattern when dealing with powder processing.

Mass Flow ensures that a mixed product remains consistent throughout the production process, right through to the final product.

Consistency of recipe formula isn’t only vital when dealing with nutritional or medicinal preparations, where ingesting too much of one ingredient could be harmful. But inconsistencies in other foods, such as beverage mixtures, could result in a poor consumer experience and damage to your brand.

What is Mass Flow?

As covered on our page about Powder Mix Segregation, Mass Flow is defined as all the powder is in motion across the whole of the container whenever any is withdrawn. Mass Flow produces a first in-first out flow sequence, eliminating any stagnant areas, and providing a steady discharge with consistent bulk density, and a flow that is uniform and well-controlled.

Mass flow is generated in Cone Valve IBCs or hoppers with a geometry specifically designed to create that flow. 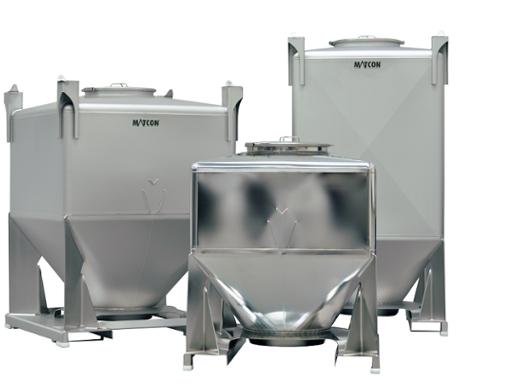 How to design your IBC and Silo for Mass Flow

Mass flow can be achieved by implementing effective design solutions in the following areas:

The opposite of Mass Flow is what is referred to as “Core Flow” or “Funnel Flow”. Core Flow refers to when powder particles flow mainly from the centre of the container, above the outlet, during discharge, leaving material on the sides of the container and causing particle rolling and separation of the mix This material can get caught up and not easily come out of the IBC. Core/funnel flow occurs in slide valve or Butterfly valve IBCs.

The traditional solution for butterfly valve IBCs — much to the frustration of systems operators everywhere — has been to stop the line entirely and then walk around with a mallet and hammer the containers (hoppers, silos, etc.) until the material in the bin starts to flow. Not very high-tech or equipment friendly.

Several problems present themselves with this “solution”:

Another problem with Bins that use butterfly or slide valves is a problem called “arching” or “bridging”.

Differences in size, shape and density of powders in a mixture can result in materials interlocking or bonding together to build an “arch” above a container’s outlet.

If any of the powder above that outlet has bonded together, forming a bridge, no powder can escape. The flow of powder stops.

Again, the solution is to “Stop the line and bring out the mallets!”

Mass Flow works on a “First In, First Out” principle meaning that product is discharged in the same order that it went into the bin. Mass flow in a Cone Valve IBC encourages all material to flow out of the bin, meaning there is little residue left in.

On the other hand, the Butterfly/slide valve IBCs that experience Funnel/Core Flow which works on a “First In, Last Out” pattern – will have aging powders inside containers, which can lead to caking, oxidation, and general spoilage.

But the problem is exacerbated when powders have bonded at the sides of a container, leaving them there far longer than they should be.

Until now, it has been a matter of deciding what is more costly:

The patented Matcon Cone Valve is a revolutionary design that accounts for bridging, arching, and core flow as a result of:

The cone shape of the valve, the raising, and lowering of the valve at discharge, as well as the internal vibration, all assist in facilitating mass flow.

The Matcon Cone Valve is an integral part of our IBCs which have also been custom-designed to ensure the mass flow of product.

Confidence that a line will remain in production, as a result of consistent product flow, means that the discharge process can be automated.

No more stopping the line and halting production while operators dig in their bottom drawers and pull out their trusty mallets. 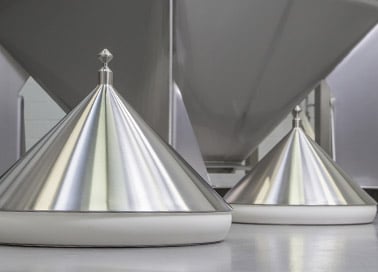 The Matcon Cone Valve integrates vibration right into the cone at the top of the lifting cycle.

This action stimulates even the most stubborn powders (whey protein and flour are notorious) to flow downwards. Bridging potentiality is thereby reduced.

On the contrary, if the powder flows freely (e.g. sugar), the cone’s lift can be reduced so as to control the quantity of flow at discharge.

the confident certainty that a line will continue running would not be possible were it not for our innovative Cone Valves which are integrated into each IBC. Posted by Matt Baumber
Find me on:
LinkedIn Twitter

Discover the savings and efficiencies that you will realise across your production process.

Selecting the correct factory layout is key to efficient manufacturing and flexible production.

How To Choose the Right Blender/Industrial Mixer

Explore and review the key questions you need to ask when you're evaluating an industrial mixer.

Find out how to create a flexible manufacturing system that gives you a competitive advantage.

Case Study: A Manufacturer of Antiretrovirals

Need: Increase capacity and throughput but were experiencing issues with powder flow, downtime, and waste.

Discover how a change in materials handling can give manufacturers an ‘edge’ over their competitors.

How Matcon used a closed manufacturing process to minimize risk during the mixing of refractory..

END_OF_DOCUMENT_TOKEN_TO_BE_REPLACED

In the food industry, quality control is paramount. This is particularly relevant in manufacturing..

END_OF_DOCUMENT_TOKEN_TO_BE_REPLACED

Our Global Aftersales & Support Team At Your Service

At Matcon we are focused on offering best-in-class customer service before, during and after the..

END_OF_DOCUMENT_TOKEN_TO_BE_REPLACED

Over the years we have seen a wide range of different powder types and production issues that our Cone Valve technology has been able to overcome. This gives us the confidence to believe we can handle any challenge you wish to put to us.

For a quick answer, fill in your question below.

To ensure you make the most of your IBC system, we offer a comprehensive range of spares, maintenance and support packages.

Speak to a member of the team