Reduce Your ‘Cost per Kilo’ by Avoiding Powder Segregation & Bridging

All solid dosage facilities will at some time have to deal with ‘difficult’ or cohesive powders that require operator intervention, such as opening the bin and ‘rodding’ or ‘hammering’ the sides of it. Do you know how much valuable time is lost because of that? And, following the opening of the bin, there’s the extra required cleaning of the room to consider, not to mention the GMP risks involved!

Similarly, it is not accurately known how much valuable medicine is wasted each year, simply due to the loss of blend uniformity during the manufacturing cycle. This is often directly linked to segregation or ‘de-mixing’ effects at several stages of the solid dosage process.

This costly problem can be reduced significantly selecting the right materials handling system and this blog will help you find the root cause of the problems and the solutions available to solve them.

Powder Bridging means that the flow of powder has come to a complete standstill because a permanent ‘arch’ or ‘bridge’ of powder particles has formed, usually in the lower conical section of the IBC or other storage vessel. Typically, such an unfortunate situation appears when the particles have an irregular shape (‘hooks’) and/or when they are very cohesive due to fineness, moisture etc.

Traditional ways to break the arch of powder consist of manual hammering, (pneumatic) knocking, shaking or applying vibration. However, these methods often cause the blocked powder to compact further and firm up the bridge, making discharge by gravity impossible.

The only escape then is to open up the container and push a rod down through the batch, attempting to break the bridging effects and get the powder to start flowing. When this intervention does not help, your only remaining option is to remove the container from its discharge position and start scooping....

In situations where severe blocking is a frequent occurrence, operators often use a vacuum lance system to transfer the batch manually.

Opening up a bin in order to remove the powder has, other than the negative influence on transfer speeds and consequent increased ‘waiting’ of the downstream process, one far more serious side effect - the loss of containment.   Batch and environment are now in direct contact and this results in:

In other words, higher costs and higher risks.

Even when bridging is not ‘permanent’ and flow can be activated by hammering, shaking or vibration, it is not a situation that should be accepted.  To avoid the process coming to a standstill, the flow assistors have to be operated continuously and that means noise, higher energy consumption and, last but not least, severe segregation risks. There will also be considerable damage to valuable equipment that will lead to further flow and segregation issues further down the line.

Powder Handling Example: Loss of capacity due to bridging effects of Metformin

Metformin is typically of a notoriously difficult material to discharge.  We know of a case where the tablet press was producing at an average of only 70% (3500 tablets per minute) of its design capacity (5000 tablets per minute).  For discharging the blend into the compression equipment, the site had selected a basic IBC using a manual 200mm butterfly valve at the outlet.

It appeared that approximately two or three times per batch run, the operator had to interfere with the transfer process because the flow to the compression machine had completely stopped.

In this case, changing to a Cone Valve IBC System solved the problem and is clearly a much lower investment and operational cost than installing additional tablet press capacity.

A major challenge in the solid dosage process is maintaining powder batch homogeneity throughout the various manufacturing steps.  Each time a batch needs to be transferred between processes, there is a chance that blend uniformity is lost.

At this point, it is important to highlight the mechanisms that drive segregation – or demixing.

Size differences form the largest influence on the mobility, whereas density differences are more likely to have an effect on motion when actual forces are applied.  Shape differences only have a substantial effect if the variation in shape is significant.

Because density variation is normally of a much smaller order than size variation, it is generally accepted that mobility due to size differences has the largest segregation effects.  We will therefore concentrate predominantly on the effects of those differences in particle size.

Cohesive powders clearly have a low internal mobility and segregation effects are less likely to take place, however there is the large ‘grey’ area where gravity flow is not apparent but migration of individual particles still takes place.

Apart from the blended material that is fed into roller compactors (see Report 1: How to Increase Production Output of Your Granulation Process Equipment and Improve Your Profitability), the powder blends used in solid dosage manufacturing usually have reasonable to good flow properties. This of course is a fundamental condition for segregation to occur.

The Mechanics of Powder Segregation During Transfers

Small particles penetrate through a bed of material easier than larger particles.  This fact has led to the definition of three basic segregation mechanisms:

If a batch is subjected to vibration, gravity potentially causes particles to move down.  Because smaller particles pass through voids easier than coarser ones, there is a net downward movement of fines.  This de-mixing effect is also known as ‘sieving’ and is typically observed when the fines form a minority in a batch.

This sieving effect occurs if a container is discharged with the help of external vibration or agitation of some type. This assistance is needed when the material is not fully free-flowing and the container geometry is not forgiving.  We will revisit IBC geometry later in the report.

When coarse particles are the minority, based on a similar mechanism, they tend to move upward in the batch under vibration forces.   Upward movement is only limited by the weight of the material above but downward movement would require compacting or finding a large enough void, which is unlikely. A slight upward movement of a larger particle would give the fines around it instant chances to fill up the space.
The net result is an upward movement of coarser material.

To avoid segregation caused by this mechanism, the following is recommended:

The particle size distribution of the material could of course be perfected to reach ‘’100%’’ uniform sizes (which makes segregation impossible) however this is a very costly exercise creating a lot of waste material.

This form of size segregation happens when a container is both filled and discharged.  During filling, the material forms a heap and on the top layer, the particles tend to flow towards the periphery of the pile.  Again, finer particles will easily find a void and get trapped, while coarser particles flow further down to the slope.  The result is a surplus of fines in the core of the batch.  This effect is called ‘Rolling Segregation’.

A similar situation can occur when a container is discharged.   Without measures to avoid it, the discharge pattern of a material flowing out of a silo or container often simulates the beginning of a ‘rat hole’ and is called ‘funnel flow’ (as opposed to ‘mass flow’).  The downward motion through the core is higher than via the sides, thus forming an angled surface for particles to roll over.

As with percolation, the coarser particles travel down further and the result is a segregated transfer with a coarser size distribution at the start of the discharge and a finer one at the end.

Measures to consider avoiding this problem:

The third cause for de-mixing is related to the difference in aerodynamic drag between smaller and larger particles as well as possible differences in density.

A batch inside an IBC is not deliberately fluidized but during discharge, an amount of displaced air moves up through ‘channels’ in the batch. This happens when the system is not properly vented and an accumulation of fines at the top of the batch is the result.

Coarser particles de-aerate faster than fine particles.  This is the reason why often, when a container is filled using a pneumatic transport system, fines become collected at the top and coarser material at the bottom.  Even when a dense phase vacuum transport system is used, there is always some degree of aeration taking place.

A diluted powder flow dropping through a chute is a situation that calls for anti-segregation measures too.  Both density and size cause different arrival times at the bottom of the chute. Solutions for segregation issues due to fluidization include:

Note:  A Gentle Let Down Chute consists of a protection pipe with two layers of disposable PE lay flat tubing.  The inside PE tube is flat and connected to the discharge position outlet.  Using a controlled feed to this tube, the powder is moved slowly down to the process without being dropped through air.

Solving the Problems: the choice of IBC

In order to avoid powder bridging during discharge of the IBC, vibrators, knockers or agitators are often used. These methods are noisy and technically not very elegant. They also introduce additional problems such as potential compacting and segregation as we have already discussed. 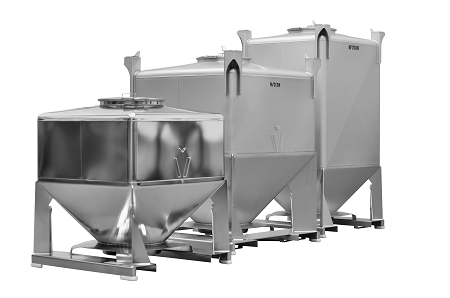 Another way ahead is improving the geometry of the IBC.   Besides minor adaptions such as surface roughness, some improvement comes from reducing the angle of the conical part of the container.  Angles less than 30º with the vertical are introduced in order to achieve ‘Mass Flow’ rather than ‘Funnel Flow’.

Although this improves flow, the height of the container, for a given volume, increases significantly and that can result in head room problems and consequently an increased building cost.  Where cohesive powders are concerned, the flow improvement is limited.

Modern Cone Valve technology is the most beneficial way forward and offers a combined solution for each of the powder flow issues discussed in this report:

As discussed, when emptying a container, the discharged powder volume needs to be replaced by air in order to ensure continuation of discharge.  With blended material, it is not a good idea to allow the air to move back up through the batch, dragging up fines and collecting them on top of the batch.

Venting the IBC is quite a challenge because the vent itself:

Because the commercially available vent valves compromise one or more of the above requirements, Matcon have designed a proprietary vent valve to serve all these purposes, which is mounted on the Matcon IBC.

By examining the root cause of typical powder handling problems such as blocking, bridging, segregation and dust, it is easier to find and understand available solutions.

These handling problems can be addressed completely using Matcon Cone Valve IBC Systems, all the way from feeding granulators (cohesive powders and blends) through tumble blending (no discharge needed out of the blender – no rolling segregation) down to the tablet presses as well as capsule and sachet fillers.

A lot of engineering attention needs to be placed on proper venting of the Discharge System. One of the focus points is the vacuum vent on the IBC. Matcon has designed a new solution which meets the challenging requirements for such a vent.

By using Matcon’s expertise, non-planned operator intervention is reduced and blend uniformity is preserved during all powder transfers.

In other words: your cost per kilo reduces.

If you would like more information regarding how the materials handling system can reduce your ‘cost per kilo’, please contact: 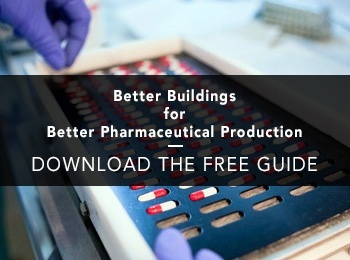 Blog articles direct to your inbox

For the latest news, insight and updates.